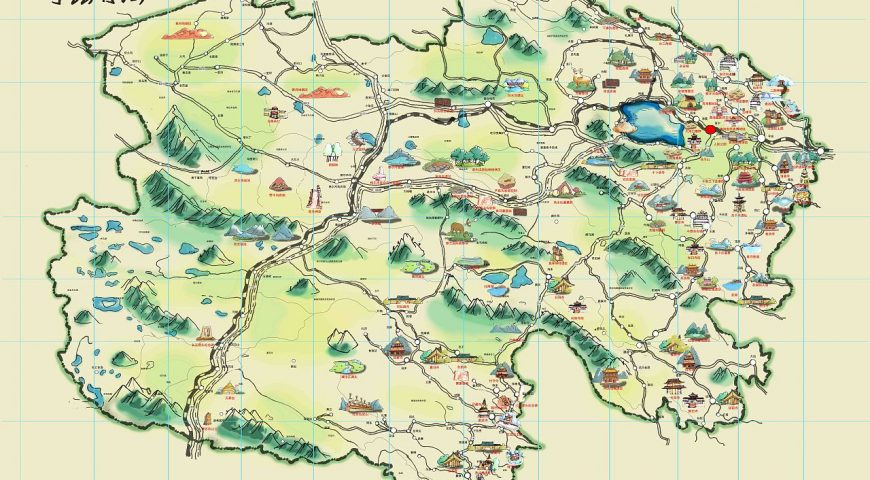 Since ancient times, there have been traces of human activities. Di and Qiang are the first that lived in this land. The remains of ancient culture indicate that the development of Qinghai can be dated back to 6,000 years ago. In Xia and Shang dynasties, some of the Di people came and settled down in the east part of today’s Qinghai and started farming. With the introduction of advanced production techniques from the Central Plains, farming was Emperor Wudideveloped considerably, and the population also increased. The Di people were related by marriage with other ethnic groups. Their decedents became the Han nationality later.

In the second year of Yuanshou of Emperor Wudi (wǔ dì 武帝) in West Han Dynasty (121B.C), the royal government established a fortress here and built the Xiping Pavilion overseeing the areas of Yellow River and Huangshui River (huáng shuǐ 湟水), thus began its control over the eastern part of Qinghai. Later, it established seven counties including Linqiang, Anyi, Poqiang, Yunwu, Yujie and Heguan, formally incorporation this area into the systems of prefectures and counties of the Central Plains feudal dynasties.

At the beginning of the 4th century, the Tuyuhun (tǔ yù hún 吐谷浑) people moved into Qinghai and set up a kingdom of their own. Later it was controlled by the Sui Dynasty (581 – 618) which established Xihai and Heyuan prefectures here.

Songtsen GampoIn the 7th century, King Songtsen Gampo (sōng zàn gàn bù 松赞干布) united the Tibetan Plateau and set up the Tubo (tǔ bō 吐蕃) Dynasty. He took control of the tribes in Qinghai. The rein of the Tubo Dynasty lasted for 200 years and made considerable contributions to the development of Qinghai and the relationship between the Han and Tibetan people. The famous Tang – Bo Ancient Road existed for 210 years and had for reaching influence on the fostering of friendly ties between the Han and Tibetan people and the promotion of harmonious coexistence of all the different tribes.

In the first year of Baoyuan of Emperor Renzong (rén zōng 仁宗) in Song Dynasty, the Shanzhou Prefecture was changed to Qingtang City. Four other cities, I.e. Lingu, Xuanwei, Zongge and Miaochuan, were set up. It was the beginnings of the exchange of tea and horses with the Central Plains. Economy and culture in the areas of Yellow and Huangshui rivers saw new progress. In the third year of Chongning (1103) of Emperor Huizong (huī zōng 徽宗) in Song Dynasty, Shanzhou Prefecture was changed to Xining Prefecture. The name of Xining first appeared in History.

In the 13th century, the Mongolians entered Qinghai, and Kublai Khan ascended the throne of the Yuan dynasty. He established administration to govern the Tubo tribes in Qinghai and Gansu. In the 18th year of Zhiyuan (1281), a provincial government was formed to control prefectures like Xining. In the 5th year of Hongwu (1372) of Emperor Taizu (tài zǔ 太祖) of Ming Dynasty, the Xining Prefecture was changed to Xining Wei. It controlled 6,000 households. In the first year of Hongzhi of Emperor Xiazong (xiào zōng 孝宗) in Ming Dynasty, a military post was established in Xining taking direct control of the Mongolian and Tibetan people in the area around near Xining. The system of mixing Han and local officials at the beginning of Ming Dynasty later evolved into the so-called Tusi system (a system of appointing tribal hereditary headmen since Yuan Dynasty). Under the new system, a series of administrative divisions and government departments were set up.Emperor Yongzheng

At the beginning of the 16th century, the Heshuote (hé shuò tè 和硕特) tribe, one of the four tribes of Elute Mongolia, moved to Qinghai. In the first year of the reign of Emperor Yongzheng (雍正) in Qing Dynasty (1644-1911), the rebellion of Lubuzangdanjin (lú bù zàng dān jīn 卢布藏丹津) was suppressed. Since then, the Qing Dynasty enhanced its control and the development of Gansu, Ningxia and Qinghai provinces. It appointed a special minister to oversee the 29 Mongolian tribes and the affairs in southern Qinghai and the Yushu area. In northeast Qinghai, Xining Fu (a feudal administrative division) was founded which inherited the Tusi system (tǔ sī zhì dù 土司制度) of the Ming Dynasty and was under the jurisdiction of the Gansu Province.

In 1912, the Northern Warlords government appointed Ma Qi as the highest military commander of Xining. In 1915, Ma was entrusted military and minority affairs concerning Mongolian tribes and the Gansu, Ningxia and Qinghai provinces. Since then, Ma’s warlords controlled Qinghai for almost 40 years with the support of the Kuomintang government. In 1929, Qinghai Province was formally founded.

After the founding of the People’s Republic of China in 1949, the backward, cruel feudal warlord’s rule was overthrown, and a new democratic government was set up in Qinghai.